St. Louis County acquired the former Jefferson Barracks military reservation in 1950, to be used as a “historical monument.” One of the focal points of the Jefferson Barracks Historical Park was the historic buildings, particularly the 1857 stone powder magazine that overlooked the Mississippi River.

The Powder Magazine Patio was installed by Oscar F. Sellenriek and Associates in 1961, based on the design by Emmet Layton, of Layton, Layton and Associates to encourage historical programs on the site, and give a scenic view of the river. In planning, i twas originally referred to as the General Nathaniel Lyon Overlook, then later named for General Henry Atkinson.

After more than fifty years of use for history programs, military ceremonies and local events, the patio was in need of repair. In 2013, as part of the renovation, it was selected as the ideal location for “the Old Guard” statue, created by B.J. Mungenast.

The 3rd United States Infantry Regiment, known as “The Old Guard,” is the military unit that conducts all official ceremonies and special events for the United States Army, as well as providing honor to the Nation’s fallen Soldiers. The Old Guard, the oldest active duty infantry regiment, was established on June 3, 1784. It was among the first responders during the September 11, 2001 terrorist attack on the Pentagon, and has been deployed twice to the Horn of Africa in support of the Global War On Terror.

The bronze monument, representing the Soldiers and families who have served in the 3rd U.S. Infantry Regiment, consist of three larger than life military figures signifying the generations past, present and future, and the different aspects of today’s Regiment. One Soldier is dressed in the ceremonial blue uniform. The second figure is clad in the 1700s traditional “Fife and Drum Corps” uniform, and the kneeling Soldier is wearing a contemporary combat uniform worn during the 2001 period, and representative of the future combat role of the Regiment. A replica of the traditional military grave marker is used in national cemeteries such as Jefferson Barracks and Arlington National Cemetery, pays tribute to the Nation’s fallen heroes. Tying all of these elements together, respectfully touching each as it makes it’s way down to the gravestone, is the United States flag, representing the important role of the military in our Nation’s history.

The idea for the monument was conceived by Colonel James Laufenburg, the 74th Regimental Commander of The Old Guard, and commander during the attack of September 11, 2001. B.J. Mungenast accepted the challenge as sculptor. She has an incredible thirst for perfection as is evidenced with every detail of her work. She spent countless hours with Soldiers modeling their uniforms, focusing on the most minute of details. She has been a life-long resident of St. Louis.

The monument project is designed to honor and pay tribute to the military who have served in the unit’s distinguished ranks throughout its celebrated history. The project consists of three, larger-than-life-size military figures representing the past, present, and future members that have and will serve. Each of the three bronze figures represents a different aspect of The Old Guard. Centered between the three figures will be a replica of the traditional grave marker used in the Arlington and Jefferson Barracks National Cemeteries paying tribute to the nation’s fallen heroes.

There are two Old Guard Monuments, one located at Jefferson Barracks Park in St. Louis, MO and the other at Joint Base Myer – Henderson Hall in Fort Myer, VA. 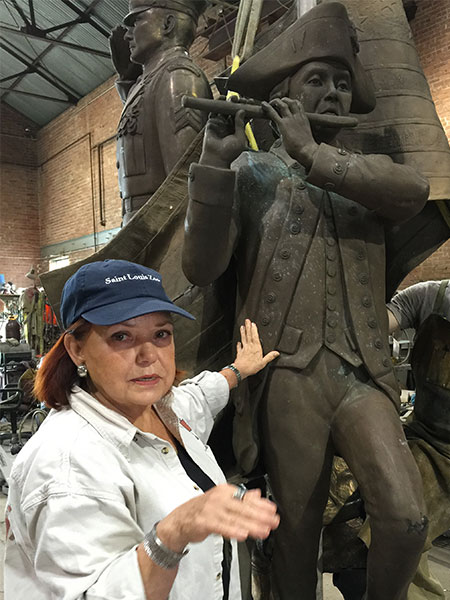